Lockdown drinking: The health impacts researchers are starting to see

When COVID hit almost two years ago, it wasn’t long before researchers and health experts turned their worried gaze to alcohol consumption in the United States and around the world. 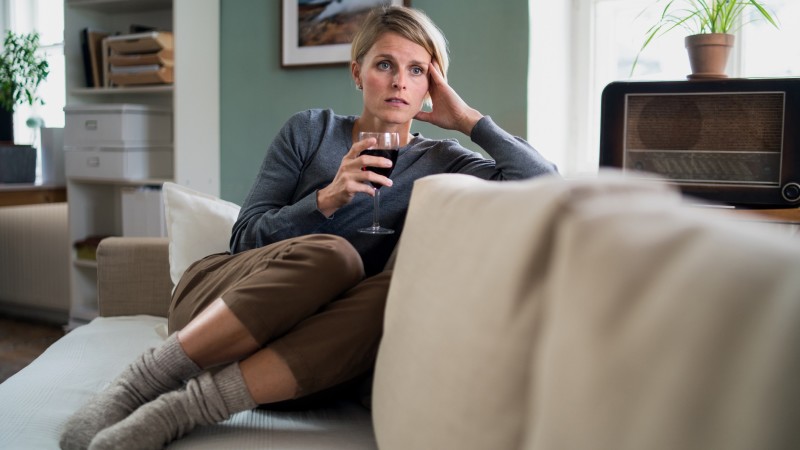 Alcohol consumption has been on the rise during the pandemic, and so are alcohol-related health effects, according to studies.

Alcohol consumption has been on the rise during the pandemic, and so are alcohol-related health effects, according to studies.

These concerns were based on historical trends; evidence shows that during periods of economic or psychological stress, people tend to drink more, and symptoms of alcohol abuse and dependence typically rise. During the 2003 SARS epidemic, researchers found that individuals in China who were in quarantine or working in high-risk locations were more likely to use alcohol to get by. Health experts in the United States worried that COVID could have a similar impact.

Doctors are not immune to this trend either, with heightened drinking reported during the pandemic, and some specialties reporting more alcohol use than others.

Here’s a look at the current research on pandemic-related drinking and its effect on our health.

The scope of lockdown drinking

A study published in the International Journal of Environmental Research and Public Health (IJERPH) in December 2020 found that these concerns were justified. According to the authors, from March to mid-April 2020, alcohol sales from off-premise locations in the United States increased by 54%, and online alcohol sales increased by 262% compared with the same period in 2019.

The findings of the above study have since been corroborated. For example, a study published in the Journal of Addiction Medicine in August focused on comparing drinking habits before and after the implementation of stay-at-home orders. After analyzing the drinking habits of 555 individuals between February-April 2020, researchers found that the average drinks per day reported by respondents was 29% higher in April than February. They also found that risky drinking behaviors increased over those 3 months; participants’ reported rates of “exceeding drinking limits” and binge drinking had increased by 20% and 21% respectively by April. Respondents’ average number of drinking days increased by 20% and the average number of drinks-per-drinking-day increased by 10%.

According to an article published in JAMA in June, “More than a dozen studies have found that 20% to 40% of individuals surveyed reported consuming more alcohol than usual during the pandemic.”

But how does all that drinking translate to health effects and risks?

According to the IJERPH study, “Alcohol consumption is associated with a range of communicable and noncommunicable diseases and mental health disorders, which can make a person more vulnerable to COVID-19,” as stated by the WHO. But this is the tip of the iceberg when it comes to the health impacts that your patients may experience due to their lockdown drinking habits.

According to the authors, habitual and excessive consumption of alcohol has been linked with both short-term harms (like injuries from falls) and long-term health conditions, including liver cirrhosis or cancer. With regard to the former, evidence of a pandemic-related spike is beginning to emerge. For example, a review of emergency department visits in a large Midwest healthcare system found that the number of alcohol-related complaints increased from 28.2% to 33.5%.

A study published by JAMA Network Open in October also indicates that some of the consequences of pandemic-related drinking are already rearing their heads. Researchers examined the incidence of alcohol-associated liver disease, by looking at national changes in deceased donor liver transplant rates for alcoholic hepatitis and waiting list registration.

An article published in JAMA in June cites various other research suggesting that alcohol-related diseases are on the rise as a result of lockdown drinking. This includes data from New York City’s Mount Sinai Hospital, which indicates that interhospital patient transfers for alcohol-associated liver disease increased 62% between January 2020 and August 2020. Data from Brown University shows that the number of consultations for alcohol-related gastrointestinal and liver diseases (in particular alcoholic hepatitis) was 78.7% higher in June/July 2020, compared with the same period in 2019.

And there are various other conditions that increased alcohol consumption can cause. A research letter published in JAMA Open Network in September 2020 points out that, beyond the negative physical health associations, excessive alcohol consumption can worsen mental health problems, like anxiety or depression. An article published by the National Institute on Alcohol Abuse and Alcoholism notes that alcohol abuse both activates the body's immune system (resulting in inflammation) and causes immune system dysfunction, leaving people more vulnerable to viral and bacterial infections. Alcohol consumption can damage epithelial cells in the lungs, leading to acute respiratory distress syndrome.

“Ultimately, impaired immune system function and an increased susceptibility to respiratory illness could contribute to more severe COVID-19 and greater risk of mortality,” the authors wrote.

Alcohol misuse is still the fourth leading preventable cause of death in the United States, per data cited by the authors of the IJERPH study, and it’s associated with countless adverse health outcomes. Historically speaking, increases in alcohol abuse and dependence tend to follow the occurrence of a natural disaster or disease outbreak. But it doesn’t have to be that way.

While 60% of Americans were drinking more during the pandemic, roughly 13% reported drinking less. So, encourage your patients to take a leaf out of that book, and take control of their drinking again in 2022.

Click here to read more about the health effects of drinking alcohol, on MDLinx.

The benefits of physician mentorship