Pneumococci evade the immune response thanks to autolysin-assisted capsule shedding

Researchers have discovered how a suicide enzyme weakens the effect of pneumococcal vaccines. Early in pneumococcal infection, the autolysin LytA promotes the survival of the pneumococcus bacterium (Streptococcus pneumoniae) by helping it shed its capsule, which allows the bacteria to evade antimicrobial peptides produced by the innate immune response, according to findings published online February 29, 2015 in the journal Nature Communications. 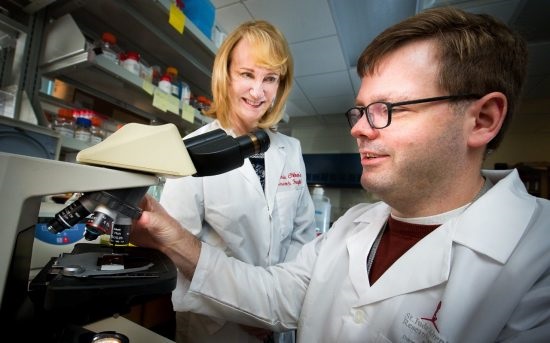 The researchers also discovered that shedding the bacterial capsule allows pneumococcus to more easily invade epithelial cells and move into the blood, where it again produces capsules to protect itself against the adaptive immune response. This sets the stage for more invasive infections and systemic disease—which may not be vulnerable to current vaccines.

“The finding in this study that one of the major roles of LytA is to drive capsule shedding helps to explain why current pneumococcal vaccines are less effective at preventing pneumonia and ear infections—diseases of epithelial tissue where the pneumococcus has less capsule,” she said.

The discovery of LytA’s role in capsule shedding is brand new. Scientists have already known that pneumococcus and other bacterial pathogens form capsules to protect themselves against bactericidal immune molecules. But, the pneumococcal capsule also sensitizes the bacterium to antimicrobial peptides found on epithelial surfaces. The results of this investigation suggest that bacteria are pre-programmed to rapidly add or remove parts of the capsule as needed to avoid detection and destruction by the immune system.

“The findings reinforce the importance of ongoing efforts to develop pneumococcal vaccines that target bacterial proteins rather than the capsule,” Dr. Tuomanen said.

For this study, the researchers sought to find the removal pathway that the pneumococcus uses to change the amount of capsule on its surface.

In laboratory experiments, the researchers tested components of the capsule against antimicrobial peptides, and found that the autolysin LytA was the only one that appeared to be involved. To test this, the researchers removed functional LytA from pneumococci, which resulted in the bacteria retaining the majority of its capsule instead of shedding it. The researchers found that these pneumococci were more vulnerable to antimicrobial peptides and more likely to die within hours of infection, which demonstrated the protective capsule-shedding effect of LytA.

“This study reveals LytA to function as a Trojan horse, promoting survival of pneumococcus early in the infection by clipping off pieces of the cell wall that bear the capsule, but causing the bacteria’s destruction when activated by antibiotics,” said the study’s first author Colin Kietzman, PhD, a postdoctoral fellow in Dr. Tuomanen’s lab. “Evidence suggests that, unlike antibiotics, the activation of LytA by molecules of the innate immune response is not fatal and is most likely actively controlled or reversible.”

The researchers found that capsule shedding and antibiotic-induced bacterial death are separate processes carried out by LytA enzymes in different regions of the pneumococcus. Indeed, capsule shedding may explain why virulent isolates of pneumococci still hold onto the LytA suicide enzyme despite the lethal effect of antibiotics.

“The pathway is new to microbiology and may provide clues for designing drugs to prevent invasive disease by blocking pneumococcus from entering the bloodstream and causing more systemic infections,” Dr. Tuomanen said.