Fewer than one in five older Americans receive the two vaccines recommended to prevent invasive pneumococcal disease (IPD) and community-acquired pneumonia, according to a recent report from the Centers for Disease Control and Prevention (CDC) in Atlanta, GA. 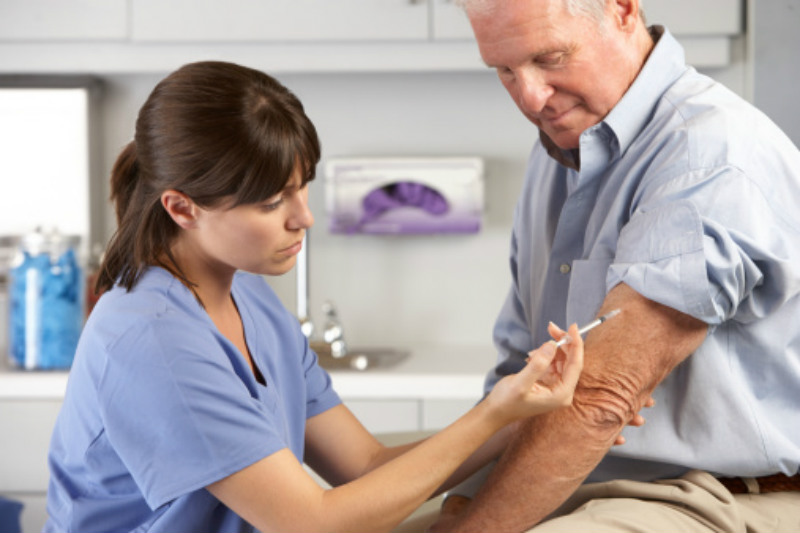 Reducing the incidence of pneumococcal disease

Health care providers could improve vaccination rates for older adults if they apply the standards for adult immunization practice.

Reducing the incidence of pneumococcal disease

Health care providers could improve vaccination rates for older adults if they apply the standards for adult immunization practice.

Immunization rates were highest among adults who were older (age 80 and above), white, or had chronic and immunocompromising medical conditions, the authors reported.

This replaced ACIP's previous recommendation of a single dose of Pneumovax 23 for patients age 65 and older. However, ACIP determined that 10% of community-acquired pneumonia cases and about 20% to 25% of IPD cases in this age group were caused by serotypes targeted by Prevnar 13. So the committee recommended broader protection against pneumococcal disease through use of both Prevnar 13 and Pneumovax 23 in series.

At that time, CDC estimated that adding Prevnar 13 vaccine would prevent 230 cases of IPD and about 12,000 cases of community-acquired pneumonia in the current generation of older Americans.

"Claims for PPSV23 [Pneumovax 23] vaccination were persistently low despite long-standing recommendations for its use among adults aged >65 years,"? the MMWR authors wrote.

More than half–56.4%–of older beneficiaries had received at least one vaccine of any type.

Vaccination rates varied across age and racial demographics as well as medical conditions, CDC reported. Older beneficiaries (aged 80 to 84 years) had the highest immunization rates for all vaccine types, while those of retirement age (65 to 69 years) had the lowest. Among racial/ethnic groups, whites had the highest immunization rates (19.5% for both vaccines), while Hispanics had the lowest (6.8% for both). Also, vaccine claims for those with chronic or immunocompromising medical conditions were higher than for those without these conditions.

Rates also varied by state; claims for both vaccines ranged from a high of 34.9% in Wisconsin to a low of 9.4% in Alaska.

Health care providers could improve vaccination rates for older adults if they apply the standards for adult immunization practice, the report noted.

"Implementation of the National Vaccine Advisory Committee's standards for adult immunization practice to assess vaccination status at every patient encounter, recommend needed vaccines, and administer vaccination or refer to a vaccinating provider might help increase pneumococcal vaccination coverage and reduce the risk for pneumonia and invasive pneumococcal disease among older adults,"? the authors advised.

ACIP plans to reevaluate its recommendations in 2018, and revise them if necessary.